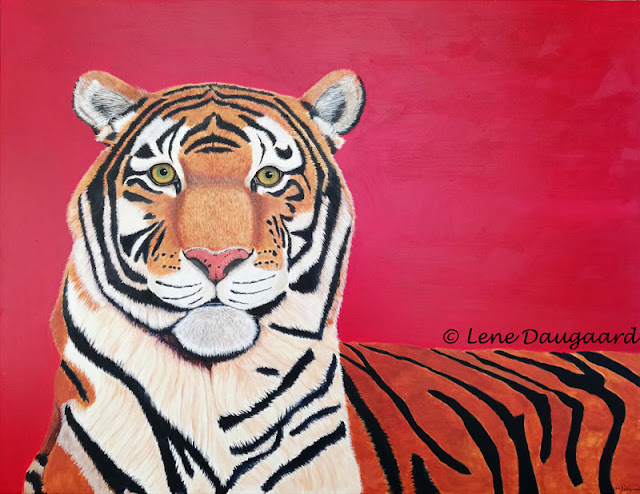 Oh my tiger - he is now finished, and looking at you from his canvas. We've been through wrestling to sheer flow-time together. He is my 4. painting in the Perfect Stripes serie. He will be exhibited first time in september and I will not see him in 4 month then - and who knows, if he leaves forever ? I'll enjoy him for now.
kl. June 22, 2019 No comments: 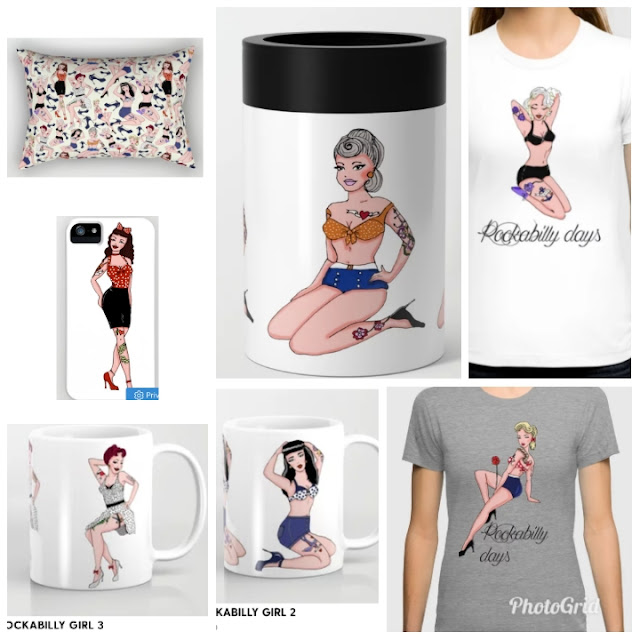 Do you know I have wildlife drawings/designs in 2 of my Doggyshops? Interested, then take a look. As always, let me know if you miss some thing. I want to draw your favorites ❤️https://society6.com/doggyshop/collection/animals-on-visit and https://www.redbubble.com/people/doggyshop/collections/1036527-the-zoo 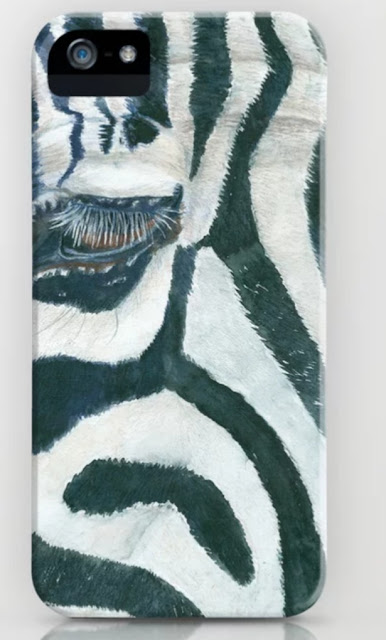 Painting on the Tiger again 😁 it is raining today, perfect for a painting session.

Here I will take you through steps of my graphite/watercolor/ink work of Water - The Elements serie.

The whole idea started out of inspiration from a poem my daughter wrote (she writes the most wonderful poems).
I started out with a print of a picture of a woman. My character does not look like a portrait of her, and it wasn't my intention to make her like that. I want a picture to have an image for the eyes to work from, not just fantasy (drawing is seeing).

My print is much smaller than my drawing, and I made the drawing without any kind of measurement, aside from my eyes measurement.The eyes are the first thing to be drawn and then the nose, mouth, then the shape of the head.

Actually I started a bit to far on the right side of the paper, to follow my first idea - her holding a conch. But so be it. I was too happy with the face to erase it. In my drawing I add shapes to a more sculpted look (not flat). It helps me when painting. 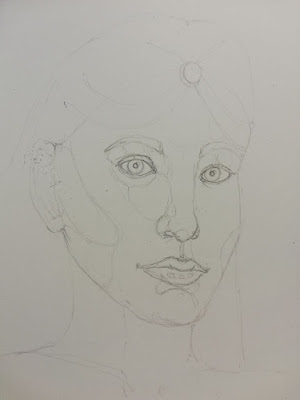 I want the background painted first. With wet loose watercolors I paint it, and then start on the womans hair. I had decided she should have the color of green-blue water. You can see I placed conches attached to her hair, now my first idea with her holding them, was not possible. 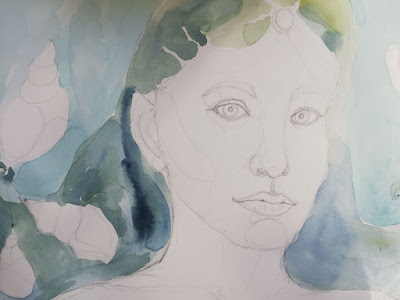 I start to paint her skin. I love watercolor edges, some sharp and some blurred. Building op a sense of form, even I don't want this image to be all realistic. Still she is naked. 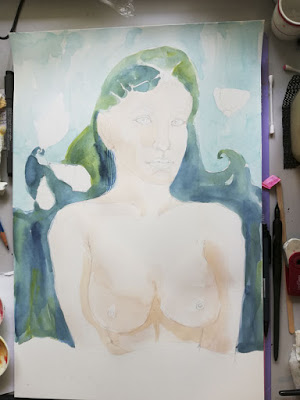 My wish is to make a mix of realism and imagination. One way to do this is to make a  stylized pattern.
I found her hair perfect for this idea. My media for this is fluid watercolors (bottle) and inkpen (dip pen). Deliberately let the lines go in different directions. 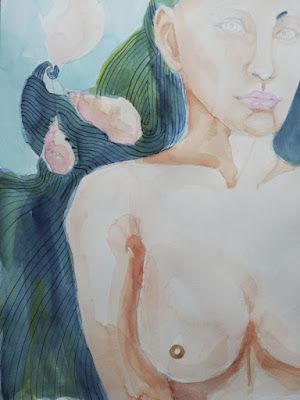 Her face is going to be the most detailed part. I work on her eyes, nose, ear and mouth and establish the shapes of cheeks and chin. Still I want to avoid pure realism.
I added gold-watercolor to her jewelry, but it will not show on the screen, I'm sorry. 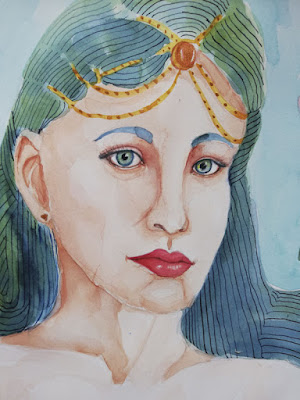 I found her being naked didn't work for me. First I placed the violet shells on her nipples. Then I placed some seaweeds on her breast. Neither worked well.

I then took the decision to get her dressed up in a green dress. I had a lot of trouble making that work, but finally I went with the green top, and a mesh below (you will see in the final image).

I also found out, I wanted fish in this image. Actually at some point I turned direction away from the poem (where it had fit to have the conch in the hand). Instead the idea of a female symbol of the element of water came up.
Where to place a fish? A tattoo of cause. This enhance the symbol of the woman herself as symbol of Water. 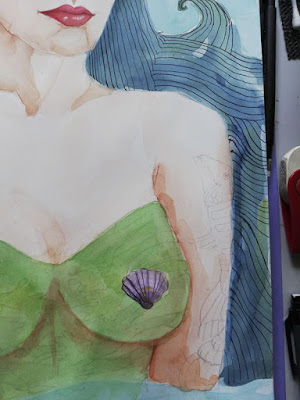 Fish tattoo made. Then I had the idea to connect it with the background with a lock of hair. 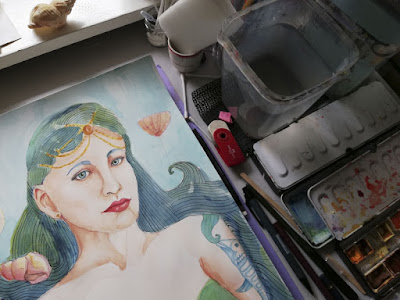 The final drawing. In many ways I achieved what I set out for - making a beautiful female in an interesting setting , having strong and complement colors. Also making an image that is a mix of realism and imagination.

My ideas in the process changed  the work - like not having a nude woman, and separating from the first idea from the poem. It also became more symbolic than first intended. I do like her anyway. 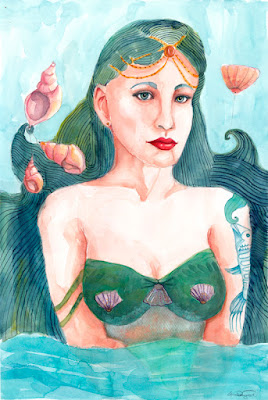 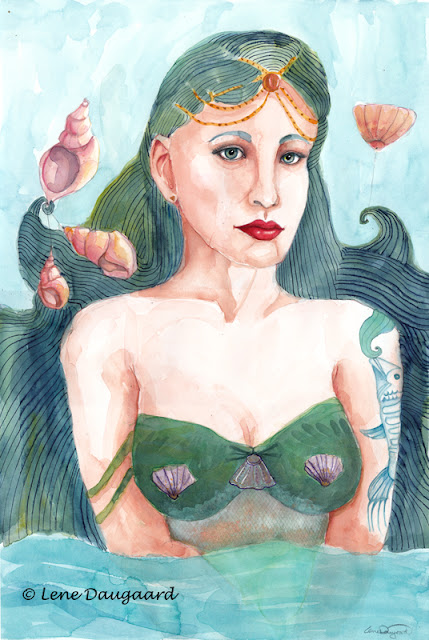 The Elements: Water. Here is my finished drawing of the female. Water symbolizes among other things: feelings, intuition and fantasy. The artwork is a mix of graphite, watercolor and colorpencil on Fabriano paper. I intend to make the other elements too - you can make your entrace in my fantasy, females of Fire, Earth and Air 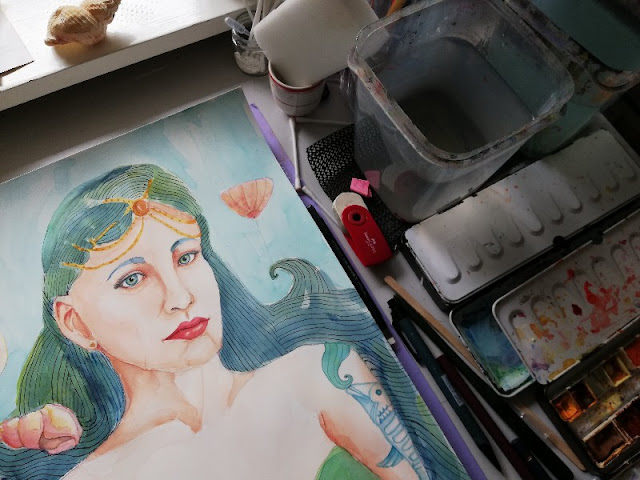 Today I continue my female drawing (sorry Tiger😁). She whisper in my ear that she is Water, so I think, she is a first in an Elements serie ;) // I dag fortsætter jeg min kvindelige tegning (undskyld Tiger😁) . Hun hvisker til mig, at hun er Vand, så jeg tænker, hun er den første i en Element serie 😉
kl. June 03, 2019 No comments:

Look over my shoulder 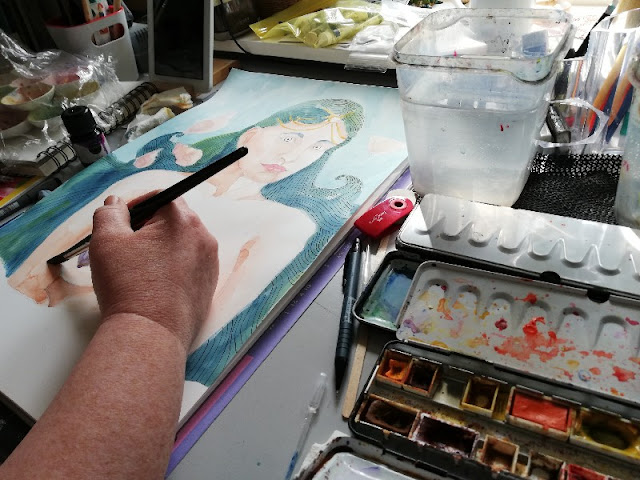 Join in - Be the first to hear about new works, look me over the shoulder in the drawing cabin, get VIP offers and more. In the welcome email you will receive free digital cards, bookmarks, wallpaper for your device& catalouges with my art

I am proud to have recieved this award from Vic

I urge you to support
WSPA
WWF
BOS
and any other organisation working to save animals, wildlife and domestic and their natural habits.

I am proud to have recieved an artblog award from Teresa

Art y Pico Award...I am proud to have recieved a Blog Award from Heather Ward